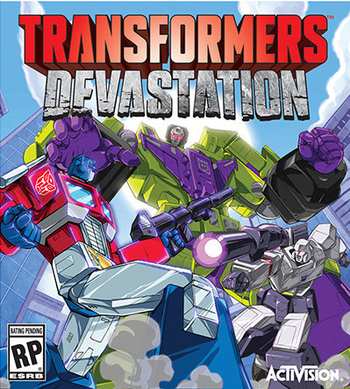 Transformers: Devastation is a Stylish Action Beat 'em Up video game based on the Transformers franchise, released on the 6th of October 2015 for the PlayStation 4, Xbox One, PlayStation 3, Xbox 360 and PC. Developed by PlatinumGames, the game is based on the Generation One era of the franchise; while ostensibly based on the recent Generations toyline, the game looks and sounds closer to the classic Sunbow cartoon, and uses Cel Shading to achieve an aesthetic similar to it. To help round off the nostalgia-fest, many actors from the series, including Peter Cullen (Optimus Prime), Frank Welker (Megatron/Soundwave), Dan Gilvezan (Bumblebee), Gregg Berger (Grimlock/Long Haul) and Michael Bell (Sideswipe/Scrapper) reprise their roles.

The plot starts out with a typical 80s era Decepticon plan, where a city is suddenly ravaged by hordes of Insecticons separate from the trio who work for the Decepticons. Realising the significance of what is happening, Megatron takes advantage of the situation and quickly learns that a legendary Cybertronian ship called the Proudstar, which carried a priceless supercomputer containing historical and cultural records long lost due to the Transformers' unending war, is buried on Earth. The Autobots naturally arrive to stop the Decepticons, who plan to use the Plasma Core Generator housed within the ship to cyberform Earth into a new Cybertron. Of course, this being Transformers, there's more going on than meets the eye.

Gameplay-wise, the game is a Beat 'em Up similar to Platinum's previous work, The Legend of Korra (and to some extent Metal Gear Rising: Revengeance, which happens to have the same director as this game), and features fast-paced Hack and Slash action and combat, including the ability to turn into vehicles during combat to damage foes. Optimus Prime, Bumblebee, Sideswipe, Wheeljack and Grimlock all appear as playable characters.

Since December 2017, this game along with all of Activision's other Transformers games are no longer available for purchase from digital stores such as Steam due to Activision's deal with Hasbro expiring.

You can catch the teaser for the game here

Has a character page desperately in need of construction.

This game contains examples of these following tropes:

Transformers!
Face the devastation!
Decepticons wage a war of wars!
'Til all are one, the Autobots
Will fight to save us all
From devastation!
TRANSFORMERS!