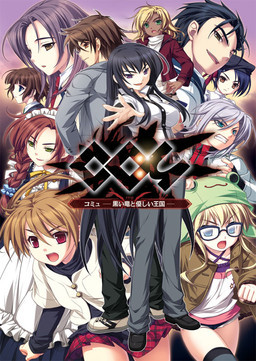 In Takakura, there is an urban legend about a mysterious singer known only as Girl A. Most people cannot see her, and those who can are called to meet her. When they find her, they meet four others just like them and are from that day forward forever linked to these people in a group known as a Coμnote Pronounced Comyu. Each of them can summon their avatar, a monster several times the size of a human who follows the will of the connectors.

When this happens to the main characters of the story, they are then immediately attacked by another avatar - a giant metal beast in the shape of an ape. The five summon their avatar, a black dragon they later name Babylon, and destroy the attacker. They they learn that in having done so, they just killed five people: when an avatar is destroyed, all five attached to it will invariably die. The connection is unbreakable and control over the avatar is a majority rules decision. In addition to that, avatars "level up" by destroying other avatars, giving rise to violent Coμs that wish to destroy other avatars in pursuit of greater strength. As time goes on, they discover many other groups like their own with their own agendas, some of them violent and deranged and some of them seeking control over all the Coμ, collectively known as the Coμnet.

Of course, there are enough conflicts within the titular coμ itself even without looking for broader political problems. The protagonist, Akihito, does not know any of the other four he was connected to. One is a self-proclaimed "ally of justice" schoolgirl, one is an otaku girl several years younger than he is, one is a violent thug, and the last is a mysterious and amoral waitress that dresses as a maid. In addition to them, Akihito is also joined by his mysterious childhood friend Kagome, also known as the "black witch".

An English translation was released on July 24th, 2014.