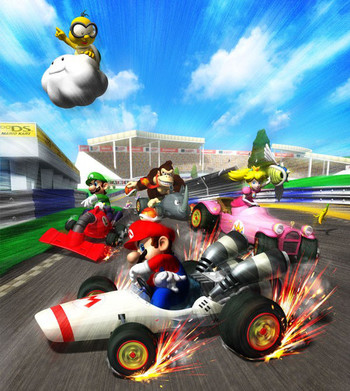 Play on the go, on two screens and online.
Advertisement:

The sequel to Mario Kart: Double Dash!!, Mario Kart DS is a racing game for the Nintendo DS, released in 2005. It is the second handheld Mario Kart game following Mario Kart: Super Circuit. It introduced online multiplayer features via Nintendo Wi-Fi Connection. This game features a mission mode and introduces two new items in the form of Bullet Bill (capable of turning the user into said mook going maximum throttle on autopilot) and Blooper (capable of blocking opponents' views with black ink), as well as the ability to play Versus and Battle modes in single-player. Plus, the "two characters per kart" feature from Double Dash!! has been dropped, returning it to one driver per vehicle system as with every installment before Double Dash!!.

A giant pinball machine based on everyone's favorite Smash reject.

A giant pinball machine based on everyone's favorite Smash reject.