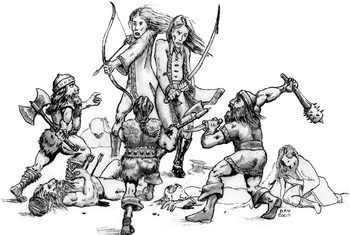 "It was not the fault of the Dwarves that the friendship waned," said Gimli.
"I have not heard that it was the fault of the Elves," said Legolas.
"I have heard both," said Gandalf...
— The Fellowship of the Ring
Advertisement:

Many stories will have animosity between a beautiful, highly advanced race or civilization, and a much more gritty, industrial, technological force.note "Technological" in the sense of having a non-spiritual attitude toward their tech. In the literal sense, both civilizations usually tend to draw on the same magical or technological forces. These themes of Harmony Versus Discipline, Romanticism Versus Enlightenment, and Brains Versus Brawn are very common, regardless of the genre.

In many fantasy fictions these roles are filled by two of the Standard Fantasy Races, the Elves and the Dwarves. Elves are tall and slender, Dwarves are short and stout. Making a physical difference like this is a common way to point out that the two groups are meant as a foil of one another.

We've given a lot of information here about the specific races, elves and dwarves, but the core of this trope isn't about them. It's about how that plays out in lots of stories that have no elves or dwarves in them at all. In historical fictions/fantasies, you'll find aristocrats versus barbarians, for example, which could be exchanged for elves and dwarves quite easily. Science Fiction will have some variation on Eloi and Morlocks, or a Crystal Spires and Togas race versus a Proud Warrior Race, or a primitive but nature-oriented race versus humans. In a contemporary business setting, it'll be marketeers versus engineers. A lot of the modern retelling of the classic Cowboys and Indians western sagas has been presented as this sort of "spiritual barbarian vs. industrialized civilization" theme. Force and Finesse tends to describe their contrasting combat styles.

One common outcome is for the elf and the dwarf to better understand each other and their respective cultures. The dwarf may gain a new respect for the elf's culture and deep learning, while the elf comes to appreciate the dwarf's craftsmanship and hard work. Also expect both sides to put aside their differences and team up against a third enemy, who's usually portrayed as primarily destructive (orcs, for example). The primary attribute shared by elves and dwarves is their resourcefulness.

Compare with Pirates vs. Ninjas—although the latter is a recent Memetic Mutation while this trope is Older Than Television. Likewise the horror-oriented werewolves vs. vampires. For neighboring foil cities or countries, see Athens and Sparta. Comedy will show this one as Slobs Versus Snobs, Big Guy, Little Guy, or Fat and Skinny. It can sometimes manifest as a form of Fantastic Racism. Don't expect to see a dwarf/elf hybrid due to Hybrid Overkill Avoidance and both sides being very squicked at the prospect. However, it's always possible to have an Orc Raised by Elves or by dwarves, if not either an elf or a dwarf being Raised by Orcs.

Tanuki/Kitsune Contrast is a Sub-Trope and the Eastern equivalent of the classic elf/dwarf dichotomy.