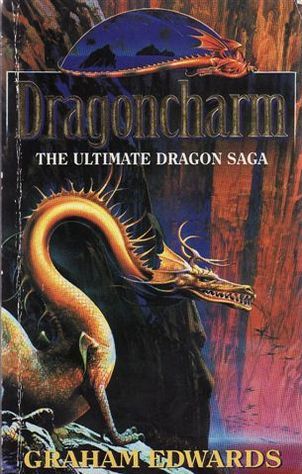 Dragoncharm is the first in a trilogy of fantasy novels written by Graham Edwards, and is unusual in having almost all of its main characters be dragons.

There are two sub-types of dragons, the Charmed and the Naturals. The Charmed have the ability to use magic, while the Naturals do not — and that has caused bitter animosity between the two. The story follows a young Natural dragon named Fortune, who teams up with a Charmed named Cumber. Together, they embark on an journey to warn the dragon king of the destruction of their settlement as a result of this fantastic racism. They discover en route, however, that the destruction is spreading faster than they can, so they must find another way to save the world...

Graham Edwards wrote a sequel named Dragonstorm, and the final instalment in the series is Dragonflame. Edwards' later series, the Stone trilogy, serves as a loosely connected sequel to these books.