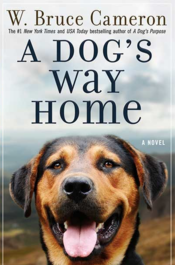 A Dog's Way Home by W. Bruce Cameron is a novel about a dog trying to find her way home.

Born underneath an abandoned house in Denver and raised by cats, Bella's life changed dramatically when she met her first human. Bella is taken in by Lucas and his mother Terri as a puppy. However, run-ins with a corrupt businessman combined with the regulations concerning dogs lead to Bella being taken away from her human family. After being temporarily put in foster care until her owners can find a new place to live, Bella decides the best course of action is to find her way back home on her own. Stuck on her own, Bella must learn to live like a stray as she tries to get back to Lucas.

A film adaptation of the book was released in 2019 starring Bryce Dallas Howard as the voice of Bella, Ashley Judd as Terri Ray, and Edward James Olmos as Axel.