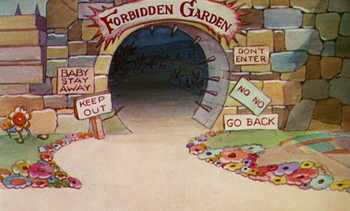 Leela: Uh, Professor, are we even allowed in the Forbidden Zone?
Professor Farnsworth: Why, of course! It's just a name, like the Death Zone or the Zone of No Return. All the Zones have names like that in the Galaxy of Terror.
— Futurama
Advertisement:

In Speculative Fiction, there is always at least one area with a foreboding name that nobody goes to. Ever. Whether it's an impassable swamp, an asteroid field, a city rumored to be haunted, a monster-infested mountain passage or simply a place the elders have declared off limits, this is the place everybody knows you only go to when you're insane. The mundane examples may simply be a Wretched Hive brimming with thugs and cut-throats. At the most extreme cases it is an outright Eldritch Location.

So, naturally, the heroes will inevitably wind up going there — whether by choice or circumstance. What good is having something that's mysteriously off limits if we can't go there and see why it's off limits? Chances are the dangers are completely exaggerated anyway, right?

It will either turn out that the Forbidden Zone is indeed incredibly dangerous, or that there's no danger at all, and the heroes were supposed to keep out because it contains forbidden knowledge. Or both. In either case, the heroes will pass through more or less unscathed, and they may even figure out a way to make the zone less forbidden.

Subtrope of Inevitably Broken Rule. Compare Forbidden Fruit, Schmuck Bait. The dangerous kind of Forbidden Zone overlaps with Death World. The Neutral Zone is a subtrope, in which the zone is forbidden because entry from either side risks starting a conflict with the inhabitants of the other side.

Not to be confused with Forbidden Zone, a Danny Elfman film.