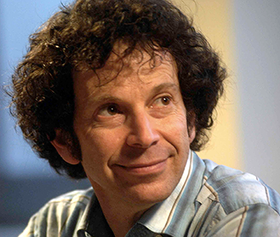 "Say who you are, really say it in your life and in your work. If you’re honest about who you are, you’ll help that person be less lonely in their world because that person will recognize him or herself in you and that will give them hope. Give that to the world, rather than selling something to the world. Don’t allow yourself to be tricked into thinking that the way things are is the way the world must work and that in the end selling is what everyone must do. Do you. It isn’t easy but it’s essential. It’s not easy because there’s a lot in the way. In many cases a major obstacle is your deeply seated belief that you are not interesting. And since convincing yourself that you are interesting is probably not going to happen, take it off the table. Think, ‘Perhaps I’m not interesting but I am the only thing I have to offer, and I want to offer something. And by offering myself in a true way I am doing a great service to the world, because it is rare and it will help.’"
Advertisement:

Charles Stuart "Charlie" Kaufman (born 1958) is an American writer, director and author known for his metatextual references, use of absurdism, and headache-inducing tendencies. Spike Jonze and Michel Gondry have each directed several of Kaufman's screenplays. Considered to be among the most brilliant contemporary screenplay-writers.

Outside of his original screenplays, he has worked as an uncredited script doctor for screenplays such as Kung Fu Panda 2. Yes, really.

Tropes in Charlie Kaufman's works include: