Literature / The Last Book in the Universe 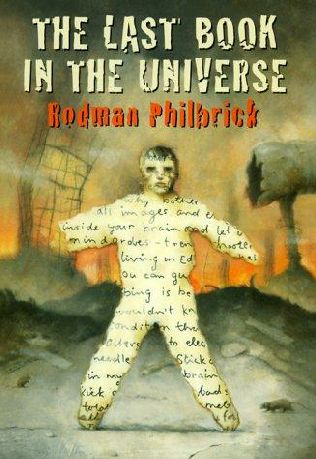 "They call me Spaz, which is kind of a mope name, but I don't mind, not anymore."
— Spaz
Advertisement:

"Nobody around here reads anymore. Why bother, when you can just use a mindprobe needle and shoot all the images and excitement into your brain? I've heard of books, but they were long before I was born, in the backtimes before the Big Shake, when everything supposedly was perfect, and everybody lived rich. Personally, I doubt the backtimes ever existed. It's like a story you tell to make yourself feel better. As if having a past makes the future somehow worth believing in. In real life, nobody comes to your rescue. Believe me, I know. But then I met Ryter, this old gummy who had a lot of crazy ideas. Together we tried to change the world..."

A 2000 young adult novel by by Rodman Philbrick who you might know as the author of Freak the Mighty.

The Last Book in the Universe provides examples of: