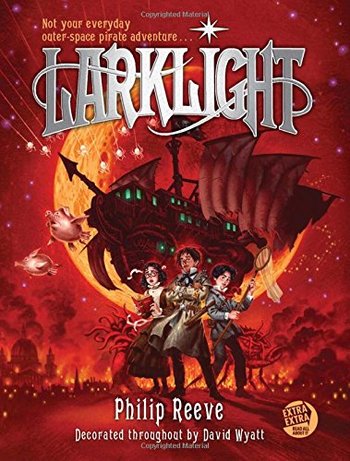 Larklight is Philip Reeve's other series, and waaay on the other end of the Sliding Scale of Idealism Versus Cynicism compared to Mortal Engines. A Steampunk Space Opera, it consists of three books, all told from the point of view of Art Mumby and his sister Myrtle:

Larklight is the series-naming first book, introducing us to the world, where the British Empire stretches out across the solar system, and its inhabitants, including Art and his family, the unpleasant First Ones, and Captain Jack Havock and his crew.

Starcross, the second book, involves Time Travel, a French radical, some goblins who want to knit a cover for an asteroid, and a race of hats. No, literally.

Mothstorm, book three: a mysterious discovery on the edge of the solar system brings Art and co. to Uranus Georgium Sidus, and a Chekhov's Gun loaded in the first book finally goes off.