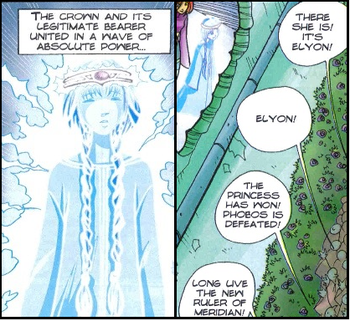 "But at the essential moment, see, your genuine kings throw back their cloak and say 'Lo!' and their essential kingnessness shines through."
— An Ankh-Morporkian, Guards! Guards! by Terry Pratchett
Advertisement:

This is the common High Fantasy plot that involves restoring the rightful heir to the throne. Requires, obviously, the Royal Blood trope; it doesn't work in a kingdom with elective monarchs.

Obviously, this is a very idealistic trope. For a start, it's always absolutely clear (in the long run, at least) which of the claimants is the "rightful" king as there's rarely more than one descendant of the same line and none of that petty squabbling over family trees you get in Real Life. If there's any military opposition to this king's return at all, it's made obvious that these are bad guys who need deposing, because it's harder to get behind a guy invading a country solely in order to plant his behind on the throne if the current ruler is doing an acceptable job. And lastly, the rightful ruler is usually — and conveniently — a competent and moral ruler, even though in Real Life this isn't always the case.

Sometimes started off by a Moses in the Bulrushes scenario. The true ruler may be identified by a Distinguishing Mark, such as a birthmark, or an Orphan's Plot Trinket. The rightful monarch may have been been a King Incognito for his own safety until the right moment, or he may learn his Secret Legacy and go to claim it, in a Rags to Royalty plot. Next thing you know, He's Back!, and The Usurper is gonna be defeated once and for all. This stuff is likely to end in an Awesome Moment of Crowning.

If this king was exiled by a revolution, then expect it to be a case of The Revolution Will Not Be Civilized and for the king to retake power with the support of the loyalist population.

Compare Prodigal Hero. Related to Fisher King, where the king is magically linked to the wellbeing of the whole country. See also King in the Mountain. Sister Trope to A Protagonist Shall Lead Them, who may be royalty but often is not. Contrast Offered the Crown and The Wrongful Heir to the Throne. Supertrope of the Man in the Iron Mask.