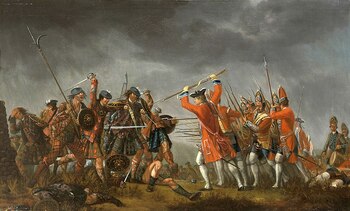 The Battle of Culloden, David Morier, 1746

A sequel or continuation of the English Civil War that more or less decided the form of the British government. Following the birth of a son to the Catholic King James II and VII note He was the second King James of England, but the seventh King James of Scotland, there was a coup (known to some as the Glorious Revolution partly because of its surprisingly easy success). James II was expelled for fear of presumed contact with Catholic powers (the Wars of Religion were dying down but their aftertaste remained) and was tentatively replaced by his Protestant daughter Mary II (who ruled jointly with her husband, William III) and then his other daughter Anne, but each in turn died without surviving issue note  William and Mary had no children, while Anne had seventeen pregnancies, of which five resulted in live births, but none of her children survived to adulthood.

Parliament thereupon brought the ruler of the somewhat obscure German principality of Hanover note Hanover was one of the more powerful German principalities, being more or less dominant in the northwest (albeit in competition with Prussia), but compared to Great Britain, a Power on the European stage when they took the throne, and by the end of the wars in question, a global Great Power, it did indeed seem puny. to sit on the throne, as although they were only distantly related to the reigning dynasty (the first Hanoverian to become British monarch was the great-grandson of King James I and VI on his mother's mother's side, making him the first cousin once removed of James II and second cousin to Mary II and Anne) they were the closest relations who were Protestants (by this point, the fact that the Hanover rulers were Lutherans while Britain was Anglican and Presbyterian mattered less than the monarch not being Catholic).

In response a conspiracy formed to restore the Stuarts. Supporters of the Stuarts were called Jacobites, after "Jacobus," the Latin form of "James" (as in James II). The Jacobites — led by James II's son James Francis Edward Stuart (a.k.a. the Old Pretender, or "King James III" as far as his supporters were concerned) and later his son Charles Edward Stuart (a.k.a. the Young Pretender) made several attempts to organize revolts in their name, and appealed to continental monarchs — especially France — for aid. The two principal uprisings, known as the two Jacobite Rebellions, occurred in 1715 and 1745.

The latter, often referred to as "The '45", was the biggest. Charles Edward Stuart landed in Scotland and attracted the support of many Highland clans. After capturing Edinburgh (the city but not the castle) and defeating the government forces at the battle of Prestonpans, he moved south into England, out-manoeuvring a government army sent north to stop him. He got as far south as Derby (120 miles north of London) but, having attracted little support among the English, he retreated back to Scotland. Pursued by government forces commanded by the Duke of Cumberland (George II's son), he was decisively defeated at the battle of Culloden. Charles's subsequent flight across Scotland and his successful escape back to France played a key role in establishing the legend of "Bonnie Prince Charlie", a romantic figure of heroic failure.

During the second half of the eighteenth century, the Stuart cause withered away, its noble supporters disinterested and its common supporters alienated and beaten. Eventually, Henry Benedict Stuart — Charles Edward's younger brother — received an annuity from George III note  Either an act of charity after Henry lost all of his French property as a result of The French Revolution or the payment of money that was legally owed to him, depending on your point of view . Although Henry, who was a Cardinal in the Roman Catholic church, never formally asserted his claim to the British throne after his brother's death (apart from having medals struck bearing his portrait and proclaiming himself 'Henry IX, King of Great Britain by the will of God but not by the will of men'), he never renounced it either, and he was opposed to the Vatican's 1792 decision to formally recognise George III as King of Great Britain and Ireland (the Papacy having previously just recognised him as the Elector of Hanover) note  Henry, his father and brother are buried in St. Peter's Basilica in Rome; among the subscribers to their monument there was George IV, who admired the legend .

Although the conflict had nominally originated in a dispute over the nature of the British constitution (specifically the Right of Succession, the Jacobites holding it to be a royal birthright, the Hanoverians a liberty of Parliament), it also drew in various cultural, ethnic and religious conflicts. In particular, the Hanoverians were supported by the largely Protestant English, Lowland Scots and Ulster Scots, while the Jacobites were supported by the largely Roman Catholic Irish and Highland Scots. Or, to put it cynically, the Irish and some Scots were fighting the English and some other Scots to decide whether a Frenchman note  well, a man who was half-English with Scottish ancestry and half-Italian but raised in France or a German would sit on the British throne.

Although it is generally accepted that the Hanoverians were the preferable candidates, having greater respect for Parliamentary authority, a good deal of Jacobite romanticism still exists, particularly in Scotland; although in Ireland it was largely superseded by republican sentiments, it entered the Scottish nationalist mythology, with Bonnie Prince Charlie and his Jacobite Highlanders becoming iconic images of the Scottish nationalist movement. To this day, there exists a small number of Britons who express support for the Jacobite cause, although the current claimant, Duke Franz of Bavaria - "Francis II", in the Jacobite reckoning - has formally declined to pursue the claim.