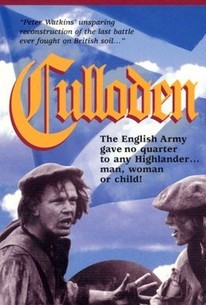 "Wednesday, April 16th 1745. This is the advanced battalion of an English government Army of nine thousand men. Their objective: Culloden moor, four and a half miles southeast of the Highland town of Inverness. Their purpose: The destruction of the Highland Jacobite army of rebellion, a tired, ill-administered force of less than five thousand men who wait just beyond the top of this ridge."
— The Narrator
Advertisement:

Culloden is a 1964 BBC Docudrama (possibly the first example of the genre) shot in a Mockumentary style, depicting the eponymous Battle of Culloden and its immediate aftermath. It was the work of director Peter Watkins (The War Game), and the influence of its pseudo-newsreel style can be seen today in such diverse examples as Simon Schama's A History of Britain and Ben Wheatley's A Field in England.

The film introduces us to the Jacobite army of rebellion, led by Charles Edward Stuart, aka Bonnie Prince Charlie, followed by some of his officers and men. We then meet the English Government Army led by the Duke of Cumberland who are charged with stopping the rebellion. The two sides clash at Culloden moor, and the result is a pretty one-sided victory for the English loyalist army (although in truth there are more Scots fighting Charlie than there are in his army).

The film then shows the Government's programme of "pacification" against the remnants of the Jacobite rebellion, now hiding amongst the mountains and valleys of the Scottish Highlands. Once this is deemed complete, the government in London takes measures to bring an end to the Highland clan system, with the Lowland Scots helping to enforce said measures.

At the time the film was made, The Vietnam War was being broadcast nightly to British TV screens during the evening news, and Culloden seems to strongly suggests a continuity between the brutality of the British Army against the Jacobite rebels and the conduct of the US-led forces against the Vietnamese two hundred and twenty years later.

A summary of the commanding officers of the Jacobite Army, which would go on to suffer total defeat at Culloden Moor in 1745.

A summary of the commanding officers of the Jacobite Army, which would go on to suffer total defeat at Culloden Moor in 1745.