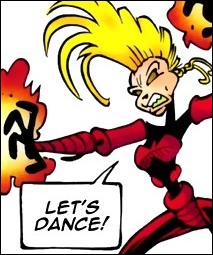 "Let's dance... and by dance, I mean let's try to kill each other!"
— Wade Wilson/Deadpool, Deadpool
Advertisement:

A Stock Pre-Asskicking One-Liner, most often heard right before an action scene.

The Hero comes across a random Mook (sometimes an elite one), or even the Big Bad themselves. The Hero announces their intention to fight/kill said bad guy, by uttering this phrase. Sometimes they'll also smile a bit or even laugh a little sadistically. Other times, this is accompanied by a cracking of knuckles, or even their neck.

Highly related to Bring It (and can overlap with such if used as an answer to someone wanting to fight).

Dimitri says that loudly after Sly made fun of his suit, causing him to get upset.

Dimitri says that loudly after Sly made fun of his suit, causing him to get upset.