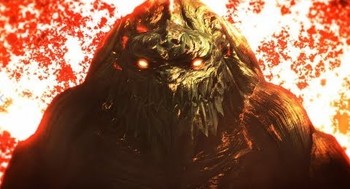 Godzilla MMD are a series of short films starting with Godzilla Earth from the anime trilogy (said trilogy written by Gen Urobuchi) battling enemies that has appeared throughout the franchise, but eventually branching out into other kaiju.

The first film is a re-imagining of Godzilla Earth's fight against the anime version of Mechagodzilla. The link is here

The second film has Godzilla appearing in modern day Japan, fending off waves of military forces, including the Super Xs, the Garuda, the Gotengo and the Vulture. The link is here

The third film, Planet Eating Wings, can be found here

, which will feature the showdown between Godzilla Earth and his ultimate nemesis, King/Otaru Ghidorah.

The author has recently announced plans to remake the first film, and make a few other shorts in the same style. See here for more info. English translations provided in the comment section.

And it is terrifying.

A fifth film, Earth Destruction Order: Godzilla vs Gigan, can be found here

This page contains the following tropes: