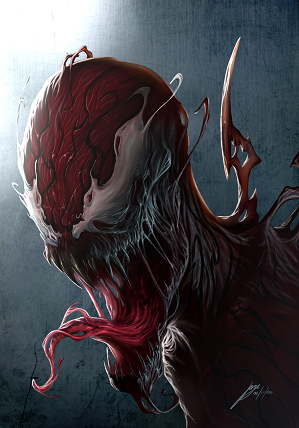 Many monsters appear in media, and they all take on different forms. Their mouths are no exception. A creature's mouth can make it disturbing or scarier than it would be if it had a normal mouth. One simple way to do that is to represent a creature's mouth as a zig-zag line. This is a good way to show how twisted a creature is, unless the monster turns out to be nice, in which case it is Dark Is Not Evil. This sort of mouth can be drawn in a few ways.

Compare with Slasher Smile, which has the same effect, but is an expression rather than the way the mouth is contructed, and may be represented by this in particularly cartoonish works. Not to be confused with More Teeth than the Osmond Family, where the character's teeth could be serrated, but the mouth line outside is straight. Compare and Contrast Bizarre Alien Biology, where the mouth line could be serrated or zig-zagged for instance, but could have a different function or place on the body, sometimes mixing this trope with Belly Mouth. Subtrope to Scary Teeth.