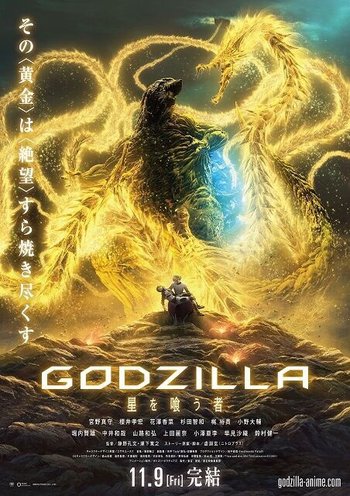 Bow down and worship the golden demise.
Advertisement:

Godzilla: The Planet Eater is a post-apocalyptic Kaiju Anime sequel to Godzilla: City on the Edge of Battle produced by Toho's animation division and animated by Polygon Pictures, and the third and final installment in the Godzilla 2017/2018 Anime trilogy. The movie premiered on November 9, 2018 in Japan and was released worldwide on Netflix on January 9, 2019.

With Mechagodzilla City—humanity's best chance of killing Godzilla Earth—destroyed, the survivors of the United Earth forces are largely cut off from the Aratrum and plunged into despair. While the remaining Bilsulado onboard the Aratrum attempt to force Captain Mori to declare Haruo Sakaki a traitor and have him executed; Haruo mourns his girlfriend Yuko Tani, who has been left brain-dead after being assimilated by Mechagodzilla's nanometal. Discovering that the Exif bishop Metphies has been using the fact that he has survived battling Godzilla twice to draw more followers to the Exif religion, Haruo withdraws into seclusion on the suggestion of Martin Lazzari, watched over by the twin Houtua priestesses Miana and Maina.

Meanwhile, Metphies and the other Exif begin enacting a ritual to summon the one entity they claim can destroy Godzilla: the planet eater, Ghidorah.

Thus, the film brings viewers a Behemoth Battle: Godzilla Earth versus Ghidorah. A battle between two gods of destruction. A battle that will determine if Earth and its people have a future...or not.

Spoilers for Planet of the Monsters and City on the Edge of Battle will be unmarked.