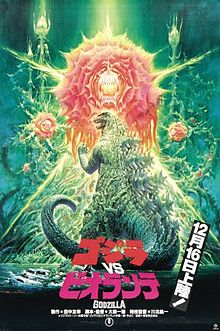 "To be honest, I'm kind of hoping that he [Godzilla] does show up again. Otherwise, I'll be out of a job."
~ Lt. Goro Gondo

Godzilla vs. Biollante is the seventeenth Godzilla film and sequel to The Return of Godzilla. Directed and written by Kazuki Omori, the film is notable for introducing psychic Miki Saegusa (Megumi Odaka), who would go on to become the longest serving human character in the Godzilla series. The story originates from a script contest Toho held, which was eventually won by a dentist named Shinichiro Kobayashi. This would be the last Godzilla film to be distributed to the United States due to the incident with Godzilla vs. King Ghidorah, which would not be released until 1998 to tie in with the first American film. The film is, rather imaginatively, titled Gojira tai Biorante in Japan.

World politics are kept and joined with the dark underbelly of energy revolution and espionage. After Godzilla's rampage in Tokyo, various groups scramble to get their hands on Godzilla's cells for their own profit. In spite of four years passing since Godzilla's fall into Mt. Mihara the Japanese have created counter measures for Godzilla and wish to use his cells to create a defense against him, with fears they will create a greater threat. However, Dr. Genshiro Shiragami (Koji Takahashi) has already taken one step too far into learning the unknown…

Then there's the eponymous plant monster.

The film was released on December 16, 1989. Its story is followed by Godzilla vs. King Ghidorah.