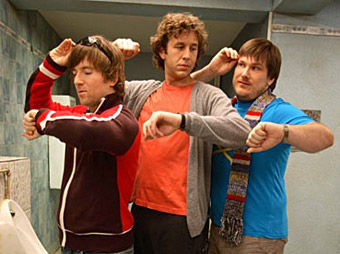 A 2009 comedy science-fiction film about time-travel starring Chris O'Dowd & Anna Faris and made by the BBC.

Ray, a science-fiction "imagineer", has just been fired from his job as an entertainer at a theme park. He goes to their local pub that night with his friends, fellow nerd Toby, and Pete who is less than enthused about the concept of Sci-Fi. Ray happens to run into a lady named Cassie, who claims to be a time-traveller from the future. Pete tops this story, however, when he returns from the bathroom having seen the entire pub massacred at some point in the near future. From this point, the three friends have a mighty misadventure going in and out of the time-rift gents, landing them 30 minutes in the past, then in peril, then substantially less peril, then life-threatening peril.