Film / The Return of Godzilla 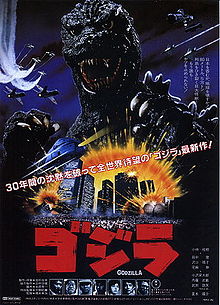 "General, I hope you succeed. But no matter what happens: Godzilla will live."
—Steve Martin
Advertisement:

The sixteenth Godzilla film, also known as just Godzilla or Godzilla 1984, and first after a nearly decade long break. It is a direct sequel to the original Godzilla (even sharing the title in Japan) and ignores all other films. Godzilla returns after a thirty years absence and in the midst of high Cold War tensions between the U.S.A. and Soviets. It is the first Godzilla film to feature Kenpachiro Satsuma in the role of Godzilla, and it would be the last movie to not feature any Ifukube music until 2002's Godzilla X Mechagodzilla.

Still produced in the actual reign of Emperor Shōwa, it is discernibly a bridge between the old and the new eras of Godzilla. The special effects, helmed by series veteran Teruyoshi Nakano, give the film a classic look while still easing the transition into the Heisei series. Several recognizable actors from the "golden age" of Toho are present, some albeit in minor roles.

Was released theatrically in the United States the following year in the heavily altered form of Godzilla 1985, which like Godzilla: King of the Monsters! before it, compressed the plot and included new scenes once again featuring Raymond Burr as Steve-*ahem*, Mr. Martin, filmed by a low budget American unit, though their integration and usefulness leans towards the often panned Americanizations of Half Human, King Kong vs. Godzilla and Tidal Wave (also distributed by New World).

Kraken Releasing (a label of Section23 Films) has finally acquired the rights to Return of Godzilla and will be releasing it on DVD and Blu-Ray, though this release will not include the Americanized version of the film due to legal issues surrounding it.

Production-wise, it was proceeded by Terror of Mechagodzilla. In continuity, it follows Godzilla (1954), and it is followed by Godzilla vs. Biollante.