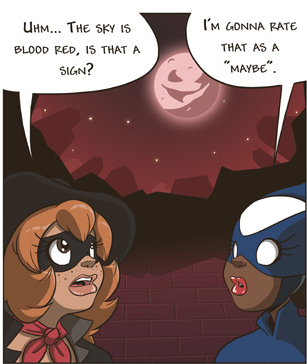 , and the Trope Namer
Advertisement:

Clouds are symbolic. White, fluffy ones mean happiness and light. Looming grey ones mean doom, disaster and, more prosaically, bad weather. They're no less ominous in fiction, as evidenced by the tropes A Storm Is Coming and the Cliché Storm. But what if the sky is red?

Often the clouds being talked about are more... direct than their symbolic cousins. They're not just a sign or symptom of impending doom and disaster, they are the impending doom and disaster. Maybe they're a mass of enemies so large that they just look like a cloud, or maybe they're some ghostly beast of a supernatural nature. Maybe they burn. Or maybe they just hang there looking ominous and threatening to unleash something awful, which never happens because the player/watcher either sees the story through to a Happy Ending or turns off the television. Or maybe it's nothing more than a visual representation of a story being dark and edgy. Whatever they are, you'd better believe it won't be good.

Evil clouds are not necessarily red, but this is still the general colour of choice: Red signifies a hazard in the West, so showing clouds in a crimson hue automatically flags them as dangerous. When the clouds roll red, it's time to run.

There is some Truth in Television to this, namely in the latter half of the "Red skies at night, sailor's delight. Red skies at morning, sailor take warning" adage. This is due to two things: 1. storms usually move from west to east, and 2. the sun sets in the west and rises in the east. In other words, approaching clouds will be illuminated in red in the morning, usually a sign of rainy weather to come. Clouds going away will be illuminated red in the evening, a sign of dry weather.

Subtrope of Portent of Doom. See also Death from Above. Not to be confused with Red Eyes, Take Warning. Related to Red Skies Crossover (when the source of the red skies is someone else's problem.). If the sky is supposed to be red, then it's an Alien Sky.