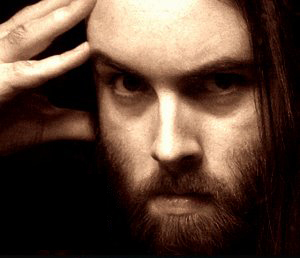 "If I should live until I wake, I pray the web my death to fake."
— Slimebeast
Advertisement:

Best known for his Creepypasta horror fiction, Christopher Howard Wolf (born September 21, 1979) AKA Slimebeast has written some of the most well-known pastas on the internet. A former game designer and actor, Slimebeast began writing short stories in 2012 for a contest held by Bogleech.com. Since then, he has written over one hundred of these tales. You can find several readings of his work on YouTube, most notibly those of Mr. CreepyPasta. His style of writing usually consists of pop culture and/or nostalgia building to a shock ending.

Although Slimebeast was part of the development team for Dragonspires, one of the first multiplayer online games, and voiced Anime as well as appearing in live action films, his best known work is that of Abandoned by Disney, Lost Episodes, and Funnymouth.

Slimebeast's work usually seems to avoid blood and gore, opting instead for unease and dread followed by a shocking reveal.

. He also runs the sites TooSpooky.com

Tropes common to his works:

Some of his works contain examples of: