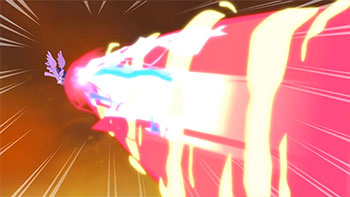 Eat your Raging Heart out, Nanoha!
"Twilight, you represent the Element of Magic. If there's anypony who can do this, it's you."
— Princess Cadance
Special Guest Star: John de Lancie as Discord
Written by Meghan McCarthy
Advertisement:

Picking up from the last episode, the alicorn princesses have resolved to surrender their magic before Tirek can steal it from them. Twilight is prepared to make the sacrifice, but Princess Luna explains that their magic cannot simply be erased. It must be transferred to Twilight herself, on the grounds that her element is magic and Tirek is unlikely to know there is a fourth princess. However, Twilight can't tell her friends or they would be put at risk. Despite this, Twilight agrees to go through with it. The transfer of power is felt by Discord, but he keeps this information from Tirek. Celestia, Luna, and Cadance lose their cutie marks in the process and collapse in a state of drained exhaustion.

Twilight returns to Ponyville under the secret burden of carrying the alicorn magic. To maintain the illusion of normalcy, she must lower the moon and raise the sun herself. But her overcharged powers keep escaping her control. When her friends catch up with her and offer to help, she refuses and tells them to keep the citizens of Ponyville inside until the crisis over. She then slips away into the Everfree Forest, seeking solitude in hopes of controlling her excess of power.

Meanwhile, Tirek and Discord raid the palace but find no alicorn magic to steal. Tirek must content himself with mocking the defenseless princesses before throwing them into Tartarus, leaving them to suffer as he did. An increasingly uneasy Discord reminds Tirek that they're ostensibly partners in this, which Tirek seemingly confirms by giving him a medallion that was given to him by someone close to him as a sign of gratitude and loyalty. He then notices the window mural of Twilight, realizing that there's a fourth princess. When he demands why Discord kept it secret, he replies that it was for insurance until he felt they were both on the same page, but now that he feels they are, he tells Tirek to look for her in Ponyville.

The Mane Five have secured the town, still unaware of the larger situation, when Discord appears and quickly imprisons them, much to Fluttershy's shock and dismay. Tirek drains the five of their magic and grows even bigger and stronger. When questioned if Twilight will do anything for her friends, Discord assures him she will. Tirek then turns on Discord and steals his magic. Bewildered by this turn of events, Discord protests that the medallion was supposed to seal their friendship. Tirek replies that the medallion was from his brother Scorpan, and that it was as worthless as him. The centaur leaves to find Twilight, leaving the despondent Discord behind.

Meanwhile, Twilight is busy trying to control her powers when Tirek finds her. She teleports to the library to get away from him, only for Tirek to destroy it, but not before she escapes with Owlowiscious. Seeing no other option, she goes on the offensive, meeting Tirek blow for blow in a massive battle across the countryside. When both parties fail to gain an advantage, Tirek brings out his trump card: Twilight's imprisoned friends, and a remorseful Discord. Despite her friends telling her not to do it, Twilight agrees to trade her alicorn magic for their freedom. Tirek then lets them all go except Discord, to which Twilight reiterates all her friends. Despite not understanding why Twilight still considers Discord a friend after betraying them, Tirek complies before absorbing Twilight's stored alicorn magic. After doing so, he grows to giant size, towering over all of the land, apparently unstoppable.

Discord apologizes to the Mane Six, saying that he only now understands the value of friendship. He gives Twilight the medallion as a genuine symbol of his loyalty and trust. The medallion shimmers with rainbow light, and the group realizes they have the final key. Once placed in the slot, the Mane Six unlock the chest. As the chest opens, a rainbow spreads up the tree into the Elements of Harmony. The six ponies are imbued with a new power — Rainbow Power — which changes their appearance and gives them a huge magical boost. With their Cutie Marks and magic restored, the six rise up in an orb of light to confront Tirek, who finds himself powerless against them. The group quickly blast him, sapping him of his power and reimprisoning him in Tartarus. They then proceed to restore the stolen magic to its rightful owners, free the captured princesses, and repair the damage done to the land.

Once they've returned everything to normal, the Rainbow Power returns to the chest. The crystal box then flies to Ponyville, plants itself in the ground, and becomes the seed for a magical crystal castle/treehouse which grows just ouside Ponyville. Twilight belatedly realizes that the castle is for her. It's then that Twilight grasps her duty as a princess: to spread the magic of friendship across Equestria. Thus Celestia dubs Twilight "The Princess of Friendship". As her first act, she proceeds to forgive Discord and welcomes him back — something a truly repentant Discord is happy with.

With that, all of Ponyville comes to see the new castle and celebrate with the Mane Six as they spread the Rainbow Power of friendship across the land.