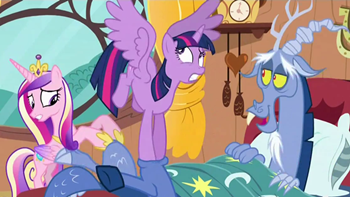 If you give a draconequus a glass of water, things go downhill from there.
"There's just one other teeny-tiny little request..."
— Discord
Special Guest Star: John de Lancie as Discord
Written by Meghan McCarthy and Ed Valentine
Advertisement:

As Fluttershy prepares for a short trip to visit the Breezies elsewhere in Equestria, Twilight is anxious about the soon-to-be arrival of Princess Cadance. Twilight notes that a few times they've met, the fate of Equestria has hung in the balance, and wants to have one day where the two of them bond as sisters-in-law. A traveling Starswirl the Bearded exhibit seems like the perfect mares' day out. Moments after Fluttershy's train departs, Cadance arrives, excited to see Twilight.

As the two princesses leave for the exhibit, Applejack, Rarity, Pinkie Pie and Rainbow Dash suddenly see a huge blue creature spinning towards them. It's Discord, who's become inexplicably sick with the "blue flu." With Fluttershy gone, Discord asks the other ponies to watch over him while he's sick. However, Rainbow Dash bolts away, Pinkie Pie is distracted by a balloon, and Discord "accidentally" gets Applejack and Rarity sick with the blue flu as well, leaving nopony but Twilight capable of watching Discord.

At the exhibit, Twilight and Cadance are admiring the ancient wizard's artifacts when Discord interrupts, asking for assistance in the name of friendship. Cadance puts herself and Twilight in a magic health bubble to prevent them from getting sick as well, and then the two princesses take him back to the Golden Oaks Library, hoping to make Discord comfortable as quickly as possible so that they can get back to their afternoon.

Discord's ever-growing requests prove maddeningly difficult (topped off with a tiny glass of water). When an exasperated Twilight starts searching all her books for a cure, he informs her that the only way to heal his blue flu is to pluck a flower from a hilltop at the edge of Equestria at sunset and brew its petals into a tea. Towing the prostrate Discord behind them, Twilight and Cadance arrive at the hill, only to find that the flower in question is enormous. They still manage to pluck it from the ground, only to be set upon by an enormous underground plant wurm which apparently eats ponies. Cadance and Twilight save each other from the wurm's grasp, overpower it, and finally seal it back under the ground.

They take the flower down the hill to Discord... who's laughing, dancing, and no longer blue. To nopony's surprise, his illness was bogus the entire time. As Twilight fumes, Discord insists that it was all a Secret Test of Character — that he just wanted to see how far Twilight would go in the name of their friendship. He gloats that she should be proud to have passed his test, even though it ruined the day she'd planned to spend with Cadance. Just then, Cadance speaks up, saying he didn't ruin their day at all. She admits that life in the Crystal Empire, while nice, is a little boring, and some adventure had been just what she needed. As Discord sourly digests this, the flower wurm suddenly reappears... and sneezes on them. Twilight and Cadance are safe in the health bubble, but Discord, unprotected, gets sick for real.

Later, in Fluttershy's cottage, Twilight dictates her entry in the Mane Six's journal: even the most chaotic of days can still be a bonding experience for a pair of good friends. Sick in bed, Discord wonders if he can trouble anypony for just a tiny glass of water.