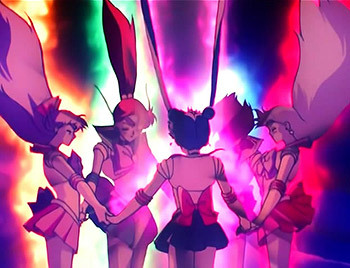 So you're in a show which is near the idealistic end of the Sliding Scale of Idealism Versus Cynicism, and the villain (often powered by hate or another negative emotion) is way too powerful for you to beat: He shrugs off all your Applied Phlebotinum like it's nothing, he laughs while ignoring your ultimate attacks, and he is about to destroy your whole squad just by sneezing at them.

It's time to form... the circle of friendship!

All the heroes get into a circle (or a Heart Symbol shape if the writers don't mind being really cheesy) and generally start to sing or do the 'closed-eyes-concentration' thing. The villain may laugh at the circle, but it's generally the last mistake he makes...

A beam of pure friendship / love will fire at the Big Bad, often instantly killing him. No matter how strong the Big Bad is, if it hits him, he'll instantly either be reduced to a corpse or turn good. Nothing can resist it. It is the ultimate incarnation of The Power of Friendship and the Combined Energy Attack.

There's no guarantee that this will work on the next villain. The solution is usually adding more friends to the circle.