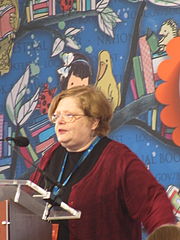 Pierce speaking at the 2013 National Book Festival.
"In the world of YA Fantasy, there's before Tamora Pierce, and there's after her female heroes started kicking down the doors (and walls, and other barriers)!"
— Bruce Coville
Advertisement:

Tamora Pierce (born December 13, 1954) is a Young Adult fantasy writer best known for her Feminist Fantasy bent. She got her start writing down the stories she told herself while doing her chores as a kid, both original and fanfiction for things like The Lord of the Rings and Star Trek: The Original Series. She noticed that a lot of fantasy stories were, for some reason, very lacking in female characters and set out to fix that herself.

Her first "professional" novel was about a girl named Alanna who dressed as a boy to become a knight, but it didn't get picked up by publishers. In the meantime, she told the story, with some changes in content, to the teenage girls living in the group home she worked at. When Pierce moved to New York to further her publishing career, her agent said she should rework the book for the YA market. Pierce edited and divided the story into four parts, and the first book in the Song of the Lioness quartet was published in 1983.

She continued to do freelance writing work—radio scripts, film reviews, etc—until 1992, when she was able to make a living entirely off of her books. Most of her series had a quartet format until Harry Potter became a huge success and publishers realized that maybe kids will read something that's over 200 pages, and most single books from 2007 on exceed the total pagecount of her earlier quartets.

Her works avoid the Smurfette Principle chiefly by casting females as the main characters.note The only male protagonists so far are Briar and Numair While all of them are Action Girls to some degree, Pierce thoroughly demolishes the Real Women Don't Wear Dresses trope to show that it's equally okay to enjoy "girly things" as it is fighting and adventure (and they're not mutually exclusive).

Many of her characters are based in personality and/or appearance on real people. For instance, she says that every mage character she writes is at least a little bit David Attenborough.

She also edited the short story anthology Young Warriors, and wrote a White Tiger miniseries for Marvel Comics with her husband, following Angela del Toro, niece of the original hero to bear the name. She has also written number of short stories set in and out of her main 'verses, published in various magazines such as Cricket.

She had a LiveJournal account, Dare To Be Stupid

, appropriately subtitled "Strong Opinion Zone", although most of her blogging was moved to her other, more lighthearted fan LJ here

. Both have since been deleted. As her writing suggests, it has a strongly liberal slant. Her website is here

Her name is the result of a typo on her birth certificate, and is pronounced the same as "Tamara."