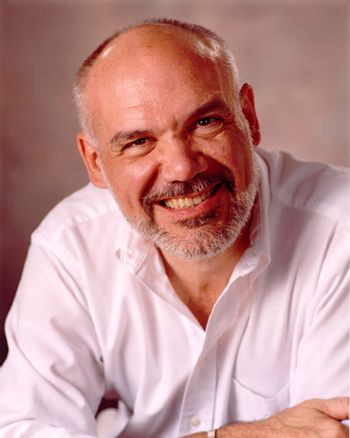 Bruce Farrington Coville (born May 16, 1950) is an American author of the baby boomer generation known for his Young Adult, Middle Grade, and Children's Literature. He tends to write in the Speculative Fiction genre, occasionally dipping into horror, although generally of the kid-friendly variety.
Advertisement:

His over 100 works include:

Four standalone horror stories originally published in the teen horror series Dark Forces and Twilight: Where Darkness Begins, they were reprinted in 1996 as a single series.

Five genius kids - Rachel and Roger Phillips, Ray "Gamma Ray" Gammand, Tripton "Trip" Duncan Delmar Davis, and Wendy "Wonderchild" Wendell III - have been dragged off to a remote island so their scientist parents can work on the ultimate computer project: creating a machine that can truly think. Upon discovering this, the kids decide to beat their parents at their own game. Joined by Hap Swenson, whose father runs the island's motor pool, they soon discover the project and its scientists are being targeted by multiple organizations, each with their own goals. Note The A.I. Gang was originally co-written with Jim Lawrence as part of a "package series", with Lawrence writing books 2 and 3, and Coville writing books 1 and 4. However, Coville wound up taking over book 3 at the publisher's request when Lawrence fell behind on the work. After the series went out of print, Coville bought back the rights to his three books, rewrote them from the ground up, and republished them in this new form, writing around The Cutlass Clue since it hadn't done much to advance the plot.

Nina "Nine" Tanleven and her friend Chris Gurley find themselves solving a series of mysteries involving ghosts and hauntings when they discover a ghost in a theater in their hometown of Syracuse, New York.

When Stuart Glassman discovers his favorite movie director has opened a summer camp for kids who want to learn how to make movies, he immediately signs up. Little does he expect that by summer's end, he'll have been kidnapped by a sasquatch, chased by a mummy, and menaced by a room full of monsters.

When young preteens stumble into S.H. Elives' magic shop, each winds up taking home a special item that will change their lives forever.note Part of the continuity that also includes The Foolish Giant, the Goblins duology, The Dragonslayers, The Unicorn Chronicles series and a handful of short stories.

My Teacher Is an Alien

A series that starts out about We Need to Get Proof, but halfway through, turns into a series about Humanity on Trial.

Blork is the biggest brat on the planet Splat. But one day, he and his pet Poodnoobie Lunk wind up embroiled in an adventure that will change his outlook on life for the better.

William has lived in Toad-in-a-Cage Castle his entire life. But one night, he discovers the strange secret in the north tower, leading him into a dangerous quest to rescue a friend from the land of the goblins. Book 2 continues the story from the point of view of William's friend Fauna, and reveals both their origins, as well as that of the enormous stone toad that gave the castle its name.note Part of the continuity that also includes the The Foolish Giant, The Dragonslayers, The Unicorn Chronicles series, the Magic Shop series and a handful of short stories.

Rod Allbright believes he's a relatively normal sixth-grader… until a tiny spaceship and its occupants crashes through his window and enlist his aid in arresting an intergalactic criminal, who must be stopped before he completes a plan that will lead to the destruction of the entire universe.

Young Cara finds herself embroiled in an unexpected adventure when she enters the magical land of Luster, home of the unicorns and other beings, and encounters the Hunters seeking to destroy them.note Part of the continuity that also includes The Foolish Giant, the Goblins duology, The Dragonslayers, the Magic Shop series and a handful of short stories.

Adaptations of the classic Shakespeare plays, incorporating essential lines from each of them into a prose style.

Earth has made contact with another world, and its ambassador insists that his son, Pleskit Meenom, be treated like a normal Earth kid. That means enrolling him in sixth grade, where he and his new best friend Tim Tompkins get into all kinds of wild adventures.

A young boy named Edward finds himself having adventures with the wizard Moongobble.

A revival of the series begun by Paula Danziger, co-written by Coville and Elizabeth Levy after Danziger's death.

Themed anthologies with introductions and an opening story by Bruce Coville, and occasionally one or two more of his snuck in among the other entries. Books 7-11 include the five-part story The Monsters of Morley Manor, which would be expanded and revised into the book of the same name.

Themed anthologies. Unlike his previous "Book of…" series, these do not usually include any stories by Coville himself, and he does not count them in his formal list of books.

Anthology series containing a mix of previously published and brand new stories exclusively by Coville. Each contains nine stories and an essay; the series also collects five of Coville's introductory stories from the Bruce Coville's Book of... series (excluding My Little Brother is a Monster, Wizard's Boy and the five portions of The Monsters of Morley Manor).

Other books by Bruce Coville:

Works by Bruce Coville with their own pages include:

Other works by Bruce Coville contain examples of: