Literature / The Monsters of Morley Manor 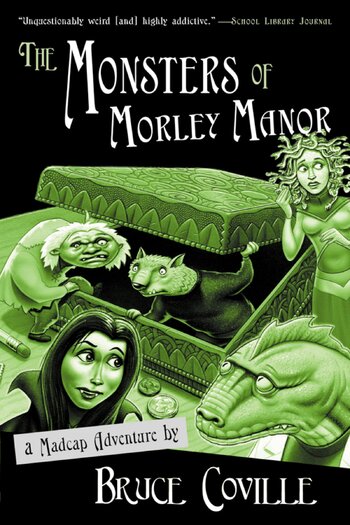 The Monsters of Morley Manor is a children's novel written by Bruce Coville. Originally released in five parts in the Bruce Coville's Book of... series (specifically, in Book of Monsters II, Book of Aliens II, Book of Ghosts II, Book of Nightmares II and Book of Spinetinglers II), it was revised and published as a single volume in 2001.
Advertisement:

The book tells the story of sixth-grader Anthony Walker and his sister Sarah, who make a startling discovery while exploring Morley Manor: a box containing five brass monster statues, who turn out to be living beings in a state of hibernation.

Coville freely admits this is the weirdest book he'd ever written, but he had a lot of fun doing it. (His own mother's response to it was "Bruce, you're getting stranger and stranger.")

An audiobook version has also been produced, with Coville as the voice of Gasper Morley.

The Monsters of Morley Manor provides examples of: