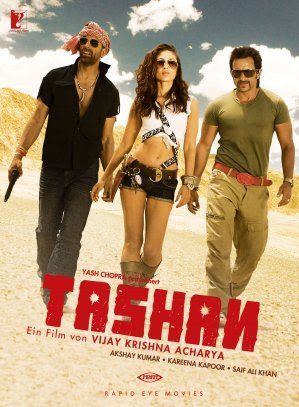 "Jimmy Cliff" (Saif Ali Khan), aka Jeetendra, is a highly westernized Indian man who works in a call center. He falls for Pooja Singh (Kareena Kapoor), and she cons him into stealing money from her boss the gangster Bhaiyyaji (Vicky Kadian) and (Anil Kapoor). But Pooja double-crosses Jimmy and takes off with the money, leaving him to deal with the wrath of Bhaiyyaji, and with Bhaiyyaji's hired goon Bachchan Pandey (Akshay Kumar). After Jimmy, Bachchan and Bhaiyyaji catch up with Pooja, there is a major gun battle with the police, which leads to Jimmy, Pooja, and Bachchan being sent off to recover the money that Pooja has hidden. Jimmy and Pooja hatch a plan to manipulate Bachchan by having Pooja romance the big goon. And then things get complicated...

Released a couple of years ahead of the current action movie boom in Bollywood, Tashan had a star-studded cast and was heavily hyped, but flopped on release. It has developed a cult following, and its comparatively sophisticated action scenes (by Bollywood standards) were certainly ahead of their time.