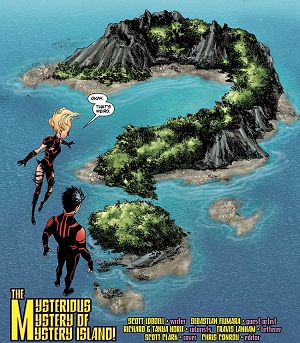 Very mysterious. Those flying people, I mean.
It was my grandfather's island. Looming and bleak, folded in mist, guarded by a million screaming birds, it looked like some ancient fortress constructed by giants. As I gazed up at its sheer cliffs, tops disappearing into a reef of ghostly clouds, the idea that this was a magical place didn't seem so ridiculous.
— Jacob Portman, Miss Peregrine's Home for Peculiar Children
Advertisement:

An island Setting where the island in question is crawling with strange and mysterious people, creatures and places, ancient, magical or high-tech. These islands are often very hard to locate (at least more than once), especially if mobile, but an Ocean of Adventure is typically a good place to go looking. Usually tropical, they can have a variety of terrain, but generally default to jungle. The island can be big, but not too big. Too big and it's really a small country and doesn't have the same sense of isolation.

These islands are often shrouded from regular folk in a number of ways... being uncharted, in the middle of The Bermuda Triangle, having a permanent fog, a magnetic anomaly, space-time vortex, invisibility cloak, force field, magic cloaking spell, SEP field, unpleasant smell. Sometimes they are raised from beneath the ocean. Because of this visitors tend to be accidental by way of shipwreck or crashing airplane.

Most stories about one of these start with the protagonist(s) arriving on the island, and ends with them leaving.

They are hard to get to. They are even harder to leave.

Things to look out for on the Island:

One of these provides some very useful plot elements:

The concept of mysterious, dangerous islands such as these is quite ancient.

Parent trope of Turtle Island and Island Base. Examples that function mainly as Island Bases should be put on that trope's page.

Not to be confused with Jules Verne's novel The Mysterious Island.