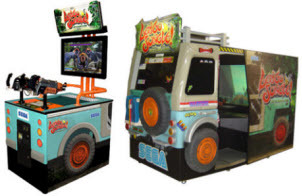 Let's Go Jungle!: Lost on the Island of Spice is a first-person rail-shooter game, in which players are required to mow down Big Creepy-Crawlies with a real-world light gun. At some points of the game, the player must perform quick time events to avoid taking damage.

An environmental organization called "Green Leaves" came to the island after it was devastated by war and attempted to restore the local ecosystem to it's original state. However, the chemical worked a little too well and caused the local wildlife to grow both in size and aggression.

Enter Ben and Norah, a floundering couple on a vacation to restore their relationship. Sure enough, a series of mutated and deadly wild bugs attack their tour, killing their tour-guides and leaving them to fend for themselves. Their only chance of escape is a helicopter on the other side of the island.