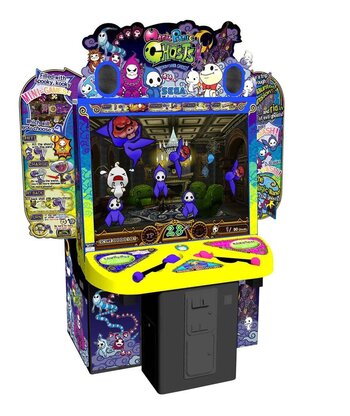 It's a boo bash!
Advertisement:

The story has the player character caught in a rain storm and coming across a house for shelter. Of course the house is haunted, but thankfully the first ghost the PC comes across is a friendly one name Sebastian who explains the house has been taken over by more mischievous ghosts and could use your help in taming them, arming the protagonist with a wand/hammer to help fight the threats. Along the way, the pair keep coming across a girl who seems to be in charge of the ghosts and that Sebastian seems to be familiar with.

The game is a mini-game compilation similar in the vein of Namco's Point Blank (1994) (Who ironically did something similar in a game called Ghoul Panic years prior). Your given a task and have to reach a quota before the time runs out, often times likewise having to avoid certain targets as well (good ghosts, bombs, etc). Succeed and you stay in the game, fail and you lose a life and losing all is game over obviously. The game is played with a wand which you use on the touch screen to complete the tasks, though a majority of which is generally hitting the target, though a few requires dragging objects. There's also a co-op mode that put emphasis on teamwork, having one of the players doing one task while the other does something else (for example, one raises a gate while the other takes out the ghosts within.).