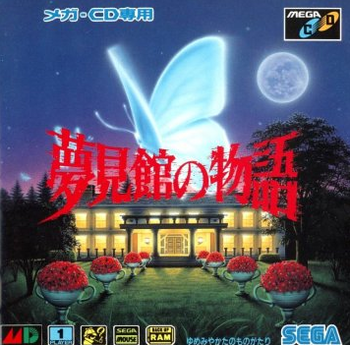 There's a tale that, beyond a certain elm tree, under a full moon, a mystical mansion can appear to those who look for it. But beware, if you don't get out in time, you're trapped inside.
Advertisement:

So goes the backstory of Mansion of Hidden Souls (also known as Tale of the Dream Mansion in Japan), an adventure game by System Sacom for the Sega CD in 1993 which spawned a sequel, Real Dream Mansion: Someone Behind the Door, a year later for the Sega Saturn. Nowadays, they're mostly notable for being "those The 7th Guest rip-offs with the butterflies."

In the original game, you play as Jonathan, whose sister has been lured to the titular mansion by a butterfly, and he must find her and escape before the mansion vanishes from the earth.

The Saturn version flips the viewpoint around, with the player character being one of the butterflies inside. As an entity named June, the moon has suddenly turned blood red, and you must work together with the mansion's other residents to uncover why.

The original game was selected to be among the Sega CD offerings included in the Sega Genesis Mini 2 in 2022.