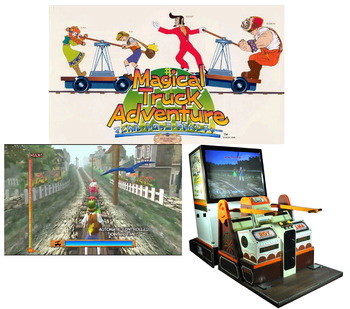 Magical Truck Adventure is an arcade by Sega made in 1998. It is an interactive game where the player have to use a unique rail cart controller to pump their handcar and keep the speed during gameplay. As well as pedal to in order to either lean the handcar to the side or jump over obstacles.

The story apparently starts in the Netherlands in which a boy name Roy is just milling around in a field. That is until a bright light suddenly appears near him. Out of it comes a girl and two men after her, taking away a stone on her person and jumping on a handcar to escape. The girl, Alma, begs for Roy's help in retrieving the stone as it has the power to travel through time which the men, Mommy (yes, really) and his henchman, Marrow, want to use to take over the world. Roy agrees, they board their own handcar and the chase is on.

The game is a major test of one's reflexes as you try to keep the handcar safe through the adventure while maintaining it's speed, as each bump puts damage to the hardcar and results in an automatic game over if destroyed. The game has different tracks depending on if you retrieve the stone or the villains manage to hang onto it.