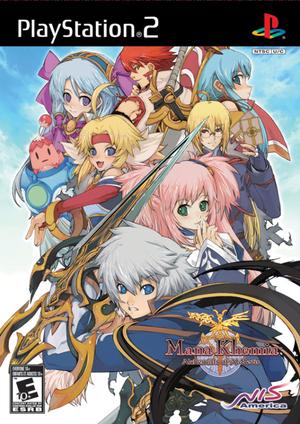 Don't forget to take your sword to school!
Mana Khemia: Alchemists of Al-Revis is a Fantasy RPG video game, a subseries of Gust's Atelier series of games based on the concept of alchemy. In this case, the focus is on Al-Revis, an academy for alchemists.
Advertisement:

The main character is Vayne Aurelius, a boy with a Mysterious Past that he himself is unaware of, since he grew up without company except for his Mana, Sulpher, a talking black cat. Vayne is found by one of Al-Revis' professors and is invited to join the school. The game follows his attempts to fit in it (complicated by the fact that his timidness and desire to help others make him a doormat) and the slow discovery of his personal past.

Playable characters besides Vayne include:

The game covers three years of Academy Terms, split down into weekly events. Naturally, being an RPG, the school's "assignments" often involve a lot of Dungeon Crawling.

The direct Sequel, set about 15 years after the end of the game, goes by the name of Mana-Khemia 2: Fall of Alchemy. There was also a port of this game for the PSP, entitled Mana Khemia: Student Alliance.

Tropes featured in this game (Note- Please post any character-specific tropes on the characters page!)