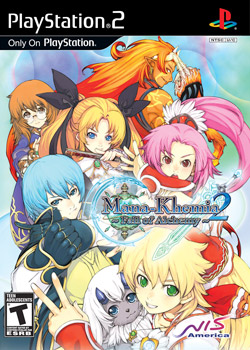 Mana-Khemia 2: Fall of Alchemy is a direct Sequel to the original Mana Khemia: Alchemists of Al-Revis. It was localized and released by NIS America in late August. The new game features a completely unique cast of characters, except for three cameos. The class and alchemy systems remain more or less unchanged, but the grow book system, battle mechanics, and field monster AI are all retooled.

The storytelling style is also changed. The events of the story are now told in two different playthroughs, each featuring a different main character and core cast. Completing both character's stories unlocks a third story which brings all the characters together and concludes the game's plot.

The character sheet for this game can be found here.