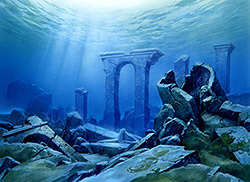 Its secrets once wrought the greatest artifice ever known. Now crabs loot the rubble to decorate their shells.
Advertisement:

Staple of Video Games and undersea films, the Underwater Ruins are a city, temple, ship, or similar place of majestic wonder submerged Under the Sea or a lake. Typically, the ruins will be Greco-Roman in appearance (lots of columns and arches) to evoke an Atlantis-like catastrophe. Usually these ruins will be artfully decayed but remarkably well preserved. This setting is a Hailfire Peaks of Under the Sea and Temple of Doom.

You might see mer-people living in the ruins, or an actual domed city for air-breathers to live in nearby or hidden in the ruins. Expect to find areas with breathable air regardless for heroes to take a breather in.

Intrepid Travelers Beware! These ruins are sometimes subject to Down the Drain. For partially submerged cities see Sunken City. For boss fights in video games that take place within these, see Underwater Boss Battle.

An ancient diamond-shaped structure under the ocean

An ancient diamond-shaped structure under the ocean