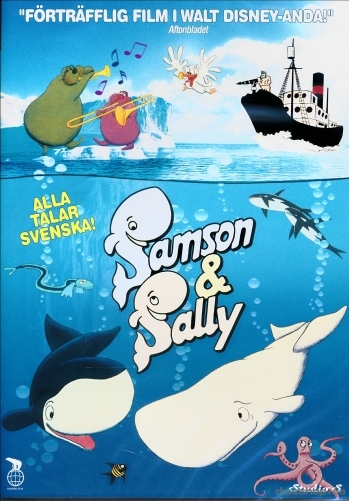 A mildly obscure movie, animated in Denmark in 1984, Samson And Sally is a Coming of Age Story centering around a young, white sperm whale named Samson. He and his herd live their lives in the Arctic Ocean, eating octopuses, hiding from the Iron Beasts (whaling ships) who hunt them, and dealing with the destruction that mankind wreaks on their ocean. Shortly after a run-in with one Iron Beast, the herd comes across an orphaned whale named Sally, who they take in. The two young whales grow closer, eventually leading to a Falling-in-Love Montage. Shortly afterwards, Samson leaves the herd to search for his hero, the legendary white whale, Moby-Dick. Based on the much darker novel "The Song of the Whales" by Bent Haller.