Video Game / In the Hunt 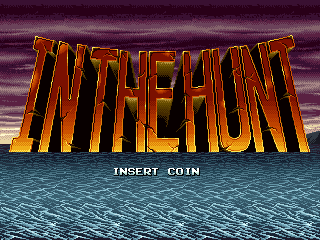 In the Hunt (Japanese: Kaitei Daisensou, "Big Sea Battle") is a 1993 Horizontal Scrolling Shooter arcade game by Irem. It was later ported to the Sega Saturn, the PlayStation, and Windows 95 for the PC.

In the Hunt is particularly unique as the player takes the role of a submarine in underwater environments. There are a total of six levels in the game. Power-ups can be obtained by shooting down supply helicopters and submarines. Unlike most shooters, the screen did not automatically scroll, to which the player had to move in a certain direction to scroll the screen themself.

The game's development team would later create Gunforce II for Irem. After leaving Irem, they had formed their own company, Nazca Corporation. With their new company, the team would go on to create Metal Slug for the Neo Geo. The similarities in both games are clearly seen in the artistic style used.

And for some reason, there is a comic for this game. Yes, really

An organization known as the D.A.S. (Destroy And Satsujin--"Satsujin" meaning "Massacre") used magnetic doomsday machines on the polar ice caps, causing them to melt. The entire world was quickly flooded, but a few societies survived to build over the highest land masses they could find and continue living. In this post apocalyptic scenario, the D.A.S., who were prepared for this catastrophe, reigns supreme over the survivors with martial law and military weapons of extraordinary power. After learning of D.A.S.'s efforts to create an even more powerful superweapon, "Yugusukyuure", the remaining survivors who are terrorized by D.A.S. secretly organize a rebellion force using a newly developed submarine known as the Granvia. The Granvia's mission is to dive into D.A.S. enforced waters, territories and eventually the D.A.S. headquarters itself to destroy every single D.A.S. weapon in sight.

Though no continuation has surfaced to date, the Playstation 2 title Sub-Rebellion (which was published by Irem in Japan) shares many similarities and the Granvia appears as a DLC unit for R-Type Tactics II: Operation Bitter Chocolate.

In The Hunt (Trumpet Lillies)

In The Hunt (Trumpet Lillies)