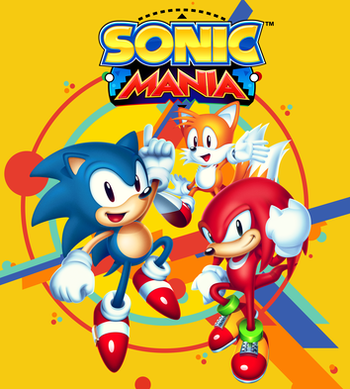 The Ultimate Celebration of Past and Future!
"This is where it begins."
— Announcement trailer

Sonic Mania is a Retraux successor to the Genesis-era Sonic the Hedgehog titles, re-imagining classic elements and zones along with new, original ones. Rather than being developed by Sonic Team, it was spearheaded by a collaborative team comprising Christian "The Taxman" Whitehead,note The man responsible for the 2011 re-release of Sonic CD and the 2013 mobile remasters of Sonic the Hedgehog and Sonic the Hedgehog 2. Simon "Stealth" Thomley of Headcannon,note The lead developer of the Sonic 1 Game Mod Sonic the Hedgehog Megamix; he also collaborated with Whitehead on the Sonic 1 and 2 remakes. and studio PagodaWest Games.note Which includes former members of the Sonic 2 HD Fan Remake, including the game's composer Tee Lopes.

The game's story goes as follows: sometime after the events of Sonic 3 & Knuckles, note  Which itself took place after Sonic Generations in the Classic Sonic dimension Miles "Tails" Prower picks up a mysterious energy reading. Though different from the Chaos Emeralds, the reading is remarkably powerful, so he convinces Sonic the Hedgehog to take the Tornado and investigate. Leading the biplane to Angel Island, it is soon discovered that the nefarious Dr. Eggman is one step ahead of them, and has already sent a squad of Eggrobos to claim the source of the signal. It turns out to be a gemstone with strange space-time qualities — the Phantom Ruby — that suddenly distorts reality, transforming those ordinary Eggrobos into an elite squad called the Hard Boiled Heavies, and warping both the heroes and villains through the locales of their past adventures. Knuckles the Echidna, the guardian of the Master Emerald on Angel Island, is also caught in the Phantom Ruby's effect. As the Hard Boiled Heavies escape with the ruby in tow, it's up to our heroes to pursue the thieves' trail throughout various zones before it's used for world domination.

Sonic Mania is the first half of the franchise's 25th anniversary celebration; the other half is Sonic Forces. It was released on August 15, 2017 for the Nintendo Switch, PlayStation 4, and Xbox One, with the Japanese release being the next day. The Microsoft Windows version was delayed until August 29, 2017 due to optimization issues, so pre-orders included a copy of the original Sonic the Hedgehog to compensate.

On March 16, 2018, Sega announced a physical release of the game: Sonic Mania Plus adds a new gameplay mode dubbed "Encore Mode",note A replay of the main campaign featuring some modified layouts, coloration, and object placements as well as a unique "party" system that replaces the lives system of the main game a 4-player competition mode and Mighty the Armadillo and Ray the Flying Squirrel, both from SegaSonic the Hedgehog, as new playable characters (both in Encore and the core "Mania" mode). There have also been some minor changes to the main game as well (most noticeable in the boss for Stardust Speedway) to clean up lingering kinks from the original release of Mania. Plus was released on July 17, 2018 (as DLC for preexisting owners), including a reversible Genesis-themed cover and an art book.

Plus's announcement was followed up by that of Sonic Mania Adventures, a six-episode animated miniseries by Neko Produtions and directed by Tyson Hesse. The full miniseries can be viewed here

"Together, we are greater than the sum of our parts."
Feedback

The boss of Chemical Plant Zone isn't one of Eggman's mechas, but a familiar puzzle duel.

The boss of Chemical Plant Zone isn't one of Eggman's mechas, but a familiar puzzle duel.