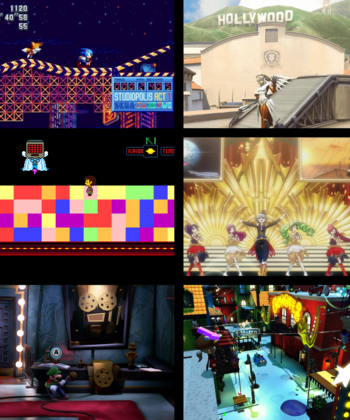 Ah, the glitz and glamour of Hollywood. The bright lights, the cameras, the red carpet...

...and the perfect place to set your video game levels.

Studiopolis settings tend to be dominated by flashing lights and cameras, marquees and billboards advertising the latest In-Universe movies, and are often set in the game's equivalent of Los Angeles. Sometimes, this level will use other video game settings as film sets (e.g. Big Boo's Haunt for a horror movie, Space Zone or Eternal Engine for a sci-fi movie).

Expect enemies to be Paparazzi, Loony Fans, or related to the genre of film being made.

Compare Casino Park, when the level is set in a casino-themed area, Band Land, when the level is music-themed, Toon Town, and Wackyland. Also compare Trapped in TV Land, where characters go through the literal manifestations of TV shows and movies in another dimension.

Please note games like movie-making simulators such as The Movies are set in this setting naturally and would be self-explanatory, thus should not be added.

Not to be confused with the voice acting studio.