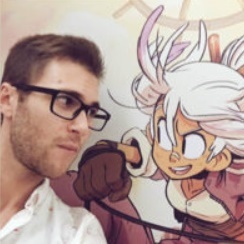 Tyson Hesse is a graphic artist who started as a web comic artist and writer. His original claims to fame are Tyson Hesse's Diesel and Boxer Hockey. He gained wider attention after posting his Sonic the Hedgehog parody comic, Sonic's Big Fat Adventure

, which quickly made the rounds through social media.

Tyson's work as a Fandom VIP and sudden popularity helped him to become official when he began working with Sega directly as a contributing artist for Sonic the Hedgehog (Archie Comics). He practically became a household name after acting as lead animator for the opening cutscene for Sonic Mania and the promotional web toon series Sonic Mania Adventures.

In 2019, following backlash from critics, fans, and Sega themselves regarding Sonic's design for the live action Sonic the Hedgehog, Paramount Studios used a new model for Sonic, which was redesigned by Hesse himself.