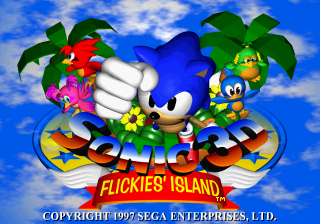 Blue is back!
Advertisement:

An isometric Platform Game known in American languages and Japanesenote via re-releases of the Mega Drive version; the Sega Saturn port was released as Sonic 3D: Flickies' Island as Sonic 3D Blast, starring Sega's three-foot speed demon, developed by Traveller's Tales. The game was released for the Sega Genesis and the Sega Saturnnote to compensate for the cancellation of the game that was supposed to be the Saturn's Killer App, Sonic Xtreme in 1996, as well as for the Microsoft Windows in 1997. It was initially passed up for release in Japan until 1999, where the Saturn version's release coincided with Sonic Adventure International. The Genesis version was the last brand new Sonic release for that system and second-last overall in North America, after the 1997 compilation Sonic Classics 3-in-1, which was previously released in Europe in 1995.

Remember that little blue bird that Sonic freed out of robot shells in the original 16-bit trilogy, the Flicky? It turns out they reside on Flicky Island, where they can travel through dimensions via giant rings. Learning about this, Dr. Robotnik, a.k.a. Dr. Eggman, has decided to invade the island and trap its inhabitants inside his robot army, so that he can seize the seven Chaos Emeralds and Take Over the World.

During his usual nomadic routine, Sonic pays a visit to his little pals on Flicky Island, only to discover they've all been imprisoned in robot shells. Now, our true blue hero must free his friends and stop Robotnik once again.

As noted above, Sonic 3D is an isometric platformer, with nifty pre-rendered 3D sprites, but that's not the only difference in gameplay. Beating an act is not done by reaching the goal as soon as you can; instead, you have to collect a set of five Flickies and bring them to a giant Dimension Ring; there are usually two or three Dimension Rings in an act, and once you successfully deposit each set, you beat the act. The only acts exempt from this are boss acts and an act near the end of the game which plays like a classic Sonic stage.

The Saturn version somewhat rectifies the control issues by offering the analog pad as an alternative to the D-Pad, as well as including a CD-quality soundtrack composed by Richard Jacques, additional graphical environmental effects such as fog and rain, and a polygonal Special Stage; but it lacks a save game feature (despite the Saturn featuring both internal and memory card-based saving) and has unusually long loading times. The PC port includes Jacques' soundtrack and a save game feature, but lacks some of the Saturn version's more noteworthy features such as the polygonal Special Stage and weather enhancements.

Jon Burton, founder of Traveller's Tales, announced in 2017 a Director's Cut Game Mod for the original Sega Genesis version. The beta version was released as a patch file during the Sonic Hacking Contest

, featuring several quality of life improvements and features such as a level select screen, Super Sonic and a Debug Mode. The final patch was released on Steam Workshop as a downloadable ROM patch on December 23, 2017.

Not to be confused with Sonic Blast for the Game Gear, though the games were marketed together in commercials. Also unrelated to Sonic the Hedgehog 3.