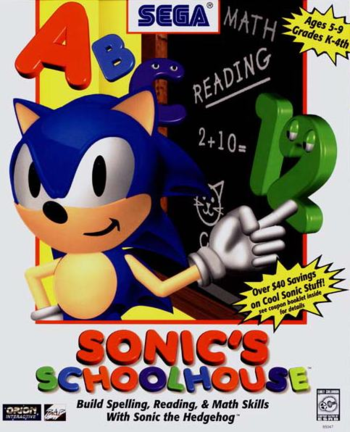 Hi there! I'm Sonic the Hedgehog! You're going to play in MY schoolhouse!
Advertisement:

Sonic's Schoolhouse is a 1996 PC Edutainment Game developed by BAP Interactive and published by Orion Interactive. Here, Sonic owns a schoolhouse and teaches kids math, reading, and spelling from kindergarten to 4th grade.

The player moves around in a first person perspective similar to Wolfenstein 3-D (although there are varying angles of walls and textures on the ground/ceiling a la Doom, there is absolutely no variation in height in the levels), finding objects in the various rooms and matching them with the proper blackboards. Along the way, you can pick up Sonic icons to play one of two minigames (one has you collecting rings while the other is a memory matching game with statues) and school buses for field trips (you can watch educational videos about various animals).

"Sorry you're leaving. You're gonna come back soon, right?"