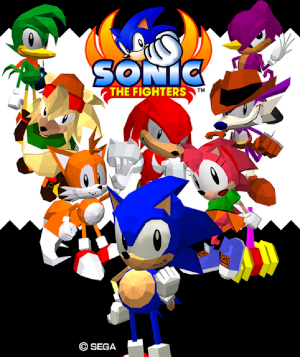 Who will save the world?!
Advertisement:

Sonic the Fighters, also known as Sonic Championship, is a 1996 arcade fighting game starring the ever-lovin' cobalt-furred insectivore and his pals.

Detective Espio sends a message to Tails detailing mad scientist Dr. Eggman's new plan to Take Over the World: launching a robot invasion on the earth, via his newly constructed super weapon, the Death Egg II. Fortunately, Sonic and Tails have built a one-seater rocket that will take them directly to the Death Egg II. There's just one problem — it needs eight Chaos Emeralds to power it. The emeralds are scattered around the world, guarded by Sonic and his friends (with the exception of Fang the Sniper, who stole his emerald from one of those guards). A fighting tournament is started to determine who gets to fly the rocket and save the world.

The game, made by Sega AM2, is more-or-less a stripped-down and very goofy Dolled-Up Installment version of Fighting Vipers. For years, it remained an obscurity, as it was only widely released in Japan with a very limited overseas release, with Bean and Bark also being included as bonus fighters in Fighters Megamix on the Sega Saturn. Fortunately, a direct home port of the game made it onto Sonic Gems Collection in 2005. In late 2012, the game received an Updated Re-release on PlayStation Network and Xbox Live Arcade with online play, as well as the ability to play as the previously Dummied Out Honey the Cat, alongside bosses Metal Sonic and Robotnik, for $5 as part of Sega's Model2 Collection series of games. It is also slated to be a playable Game Within a Game in Lost Judgment as part of Sonic's 30th anniversary.