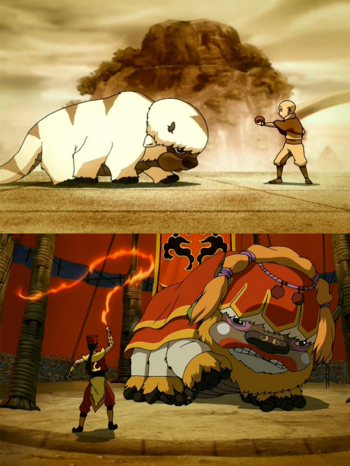 "You are responsible for what you've tamed."
— The Fox, The Little Prince
Advertisement:

When dealing with an especially wily beast, how one keeps them from killing your friends and family within biting and clawing distance from one another shows one's character.

How one handles beasts can affect the animal's behavior immensely, ranging from becoming like the family pet, watching over sleeping babies and rubbing against their owner like a cat wanting affection, to becoming an animal lashing out as it is backed into a corner, losing all trust it had for humans due to the many scars and bruises across its body.

The Hero might learn that it is best to bait the creature with the carrot, giving the animal its space, shower it with affection and compliments, give it a treat every now and again and give them a little trust. This creates loyalty from the animal, the animal protecting the trainer when threatened and even rescuing them in a hopeless situation. The villain, having no understanding of compassion, might think that simply showing the beast who's boss through fist and cattle-prod might teach the beast to understand its "betters." In a story where both methods are presented, the villain's method may come across as cruel and unusual to the audience, especially when they are given the option of a calmer and friendlier method only to reject it. Stories like this usually lead to a Death by Irony, being consumed, trampled or eviscerated by the very monster they created in their attempts at controlling it.

In a Grey-and-Gray Morality tale on the other hand, the white and black will naturally blend together. After all, some animals were not built to be domesticated, and thus need a reluctant firm hand from a pragmatic Anti-Hero.

Supertrope to Bad People Abuse Animals. Compare Friend to All Living Things, who may or may not engage in actual taming of animals, but is nigh-universally liked by them either way. See also Monster's Favorite Petting Spot.

Dragons: Riders of Berk [Both]

In "How to Start a Dragon Academy", the riders play a game of Good Idea/Bad Idea. Good Idea: scratch the dragon's sweet spot and get them to drop what isn't theirs. Bad Idea: yell at the fire-breathing monster and hope for the best.

Dragons: Riders of Berk [Both]

In "How to Start a Dragon Academy", the riders play a game of Good Idea/Bad Idea. Good Idea: scratch the dragon's sweet spot and get them to drop what isn't theirs. Bad Idea: yell at the fire-breathing monster and hope for the best.