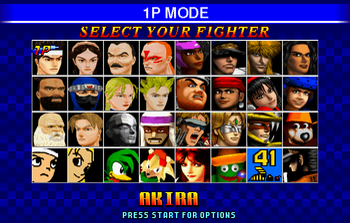 Yes, you are not seeing things. Truly, this indeed is a most ambitious crossover.
Advertisement:

Sega's own Massive Multiplayer Intercontinuity Crossover, originally developed by Sega's AM2 development team as a Crossover mostly between Virtua Fighter 2 and the first Fighting Vipers, with a bunch of other miscellaneous video games thrown in for good measure.

The characters roster is the following:

As crazy as this game and its roster was, it was great because it was 100% grade A guilty pleasure.