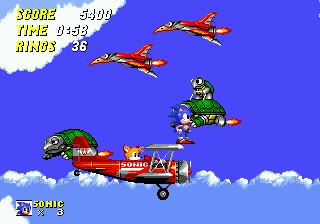 A video game area that takes place in a flying vehicle or animal of some sort in the air. Depending on the specific game, this may take the form of a single aircraft that the level will be limited to, a succession of flying vehicles that the player must navigate and jump between, or the player flying with their own vessel or mount through the open sky. Falling off will be a real danger; in platformers especially, it's common for these levels to be constantly scrolling, or to have individual platforms constantly moving across the screen, to force you to stay on you toes and keep making jumps. This may overlap with Gusty Glade to add strong winds to the mix, or lead into a High-Altitude Battle.

On large transport aircraft, the backdoor will often open midair and cargo will slide out (whether intentionally or as an Emergency Cargo Dump), presenting a hazard for players to avoid. Another thing to worry about is keeping said flying object in the air, as things as pressure drops, weather, etc. threaten it, its occupants, and cargo.

Naturally, Airborne Mooks are very common here, either as high-flying birds or balloon- or propeller-supported variants of common foes. Pilot-themed foes may also be found piloting small aircraft, which you may need to use as Goomba Springboards to cross open spaces.

See Locomotive Level for stages on moving land vehicles and Level in the Clouds for levels set on top of unusually solid clouds or other setpieces floating in the sky.

Mario takes an anchor up to an airship.

Mario takes an anchor up to an airship.