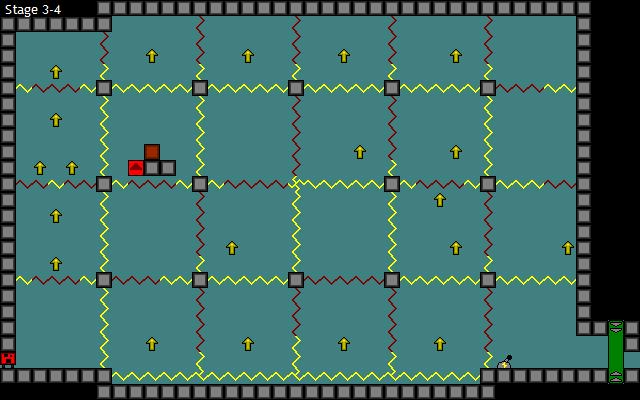 Yellow hurts. Red (electricity) hurts not. The yellow arrows give extra Double Jumps. To unlock the exit to the right, you must push the crate onto the button.

Jumper is a series of Nintendo Hard freeware platform games by Matt Thorson. This would introduce their style of ultra challenging platforming that would be seen in most other games that they have made

Jumper tells the story of an escaped experiment named Ogmo. In the year 1888, scientists began a project to create the ultimate soldier, Ogmo being one of those experiments. But he was unfinished as the labs were abandoned during World War I. Now, in the year 2004, Ogmo awakens and must escape the lab. It was later re-released as Jumper Redux, which feature both the original levels and an entirely new (and harder) set of levels with improved graphics.

In the second game, Ogmo is being hunted by an unknown businessman that wants to use him to Take Over the World. This game also introduced inertia and friction, allowing for new cool tricks like wall jumping or skid-jumping. The third game has Ogmo searching for a new home on a planet millions of miles away after leaving Earth in a rocket ship. Currently, there are plans for a fourth game in the series, but as of now it's in Development Hell.

: Jumper: The Opposing Forces, about two other experiments being sent to kill Ogmo, as well as a fan-made Jumper 2 Redux

which was going to be an Adaptation Expansion to Jumper Two, but now remains incomplete.

Ogmo appears in Super Meat Boy as a playable character.

The Jumper series provides examples of: