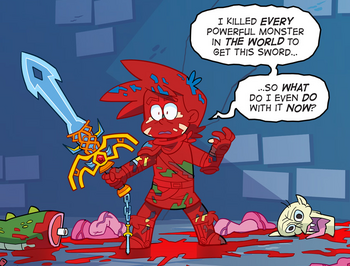 "Well, I do need something to clean my toilet..."
10. Unlocking Crap - I will no longer play through a game nine times on Ultraviolence mode with the declawed kitten character so I can unlock the infinite-ammo laser chain gun. All I've proven to anyone is that I clearly don't need the thing.
— 1up.com's Top 10 Videogame Resolutions
Advertisement:

The Bragging Rights Reward is a powerful gameplay reward you can only obtain past the point where you can actually make use of it, making it Awesome, but Impractical. Generally, in order to have earned the reward, you had to have proven you didn't need it in the first place.

Such a reward is typically found by defeating the most powerful monster, beating the hardest level, clearing the hardest difficulty, earning a perfect score on every level, or achieving 100% Completion. It's only for bragging rights because you've already conquered the toughest of obstacles, or have already exhausted all of the game's content, making the reward mostly or wholly redundant by this point.

The classic example is any reward you receive when you defeat the hidden, optional boss that's by far the toughest enemy in the game. This is also often the fate of the Infinity +1 Sword (and making weaker weapons Infinity -1 Swords). As an odd side effect, it will often work out that the more difficult an optional boss is, the less useful its reward will be, and vice versa. It may turn out to be Purposely Overpowered (essentially the game designers hanging a lampshade on this trope). A New Game+ is an attempt at getting around this, by letting you carry your new stuff into a new game where it'd actually be useful.

In some contexts, the reward might be Not Completely Useless. Some players might derive enjoyment from using the reward when replaying earlier levels or goofing off in a Wide-Open Sandbox. And even if the reward is overkill by the time you can get it, There Is No Kill Like Overkill. Generally, though, the reward would have much more practical use if you had gotten it earlier. Of course, this is not to imply that this trope is a bad thing, as to many players, the satisfaction of accomplishment is reward enough, and the Bragging Rights Reward is seen as more of a cool Easter Egg than something to truly be disappointed in.

Note that the Bragging Rights Reward has an actual effect on gameplay and would be useful if you could get it earlier. If the reward exists only to serve as proof of accomplishment and has no other purpose (such as a medal in your inventory or a star next to your save file), it's a Cosmetic Award. See also Junk Rare.